Alternatively, you can refer to the following youtube video, 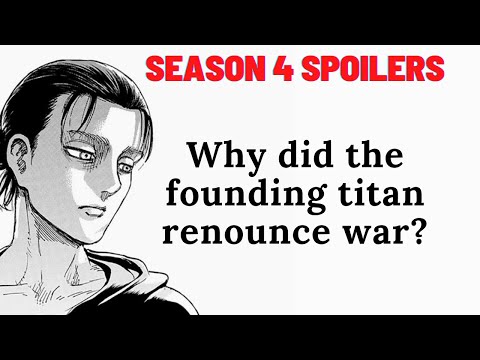 Yes, we are in the end game now as the alliance have taken off to their impending doom. This is where we as the Attack on Titan/SnK fandom adjust ourselves, lean forward into the various interesting directions Isayama could take the narrative.

But the closer we get to the end, more theories leave the realm of possibilities into either oblivion or reality.

One such theory, which has been fascinating for many years now, since its introduction in season 3 part 1.

The Renunciation of War vow

This theory has deemed itself infamous with unrooted explanations. The theory explained its best by Eren Kruger to Grisha Jaeger in Year 832 at the docks of Paradis.

“Interfere with us, and the millions and millions of Colossal Titans shall flatten the world, this threat was to merely deter an immediate attack from the Marley but the king really had no intention of fighting back”

And remember, this was clearly before the Marleyan titan science was introduced and studied.

This was not so that Paradisian Eldians should come to terms with their sins because as I said Titan Science didn’t really exist to the Marleyans for atleast till Freckled Ymir time (Year 785).

Even Frieda Reiss preached to Grisha about the Eldians coming in terms with their sins by dying in the mouths of Titans.

Something doesn’t add up right?

The renunciation of war vow seems to be a simple but unrooted fallacy. Everything requires a reason.

One might say Karl Fritz felt the agony and distress once the War Hammer betrayed him, but the founding is way stronger. It almost as if a warrior has renounced war because he was too strong. It is plausible but not here, not in attack on titan.

So, what happened really?

During the incredibly portrayed Kenny’s backstory (kudos to Wit Studio’s Araki and Sawano), it starts off with Kenny brooding over Uri Reiss at a banks of a lake somewhere in the vicinity of Wall Sina.

In their last conversation, Uri mumbles something that Kenny seemed to have missed or ignored at that time.

“In the not too distant future, the world as we know it, will [C]rumble. Therefore, in this fading twilight of humanity, I want to build Paradis[e]”

This seems to be pretty relevant right now.

“In this fading twilight, I wish to build Paradis” , is that Uri speaking? or is it his father or even Karl Fritz?

Yes, Karl Fritz might have seen the future memories without the Attack Titan’s powers. Now it seems to be interesting. One might say impossible. Yes, but Attack Titan itself is the catch

The Attack Titan is like plot hole in the grand scheme of things. It can affect the past and the future. Now once the Attack Titan and the Founding have reached singularity, the Attack Titan might have given the chance founding to briefly see “its” own future and past as well. This seems trivial but this is not temporal and it seems to be absolute.

So Karl Fritz must’ve had a glimpse of the future without knowing about the Attack Titan or its influence.

This theory is further supported in chapter 121, where Grisha Jaeger, tells Zeke that he saw the horrible and devastating future that Eren showed him, just after eating Frieda and obtaining the Founding.

What Eren did was use the metaphoric plot convenience that is the Attack Titan, where he showed the future to Grisha. But the side affect was he affected the Founding titan’s memories as well.

And this affected Karl Fritz and led all of the founding inheritors before Grisha to fall into the trap of renunciation of war vow.

what karl really did was buy time…for both Eldia and Marley.

So the Attack Titan appears to have been misused, which led to the start the whole cycle of hate and threats which again lead to Eren’s birth and the Warrior Invasion and Eren’s Legacy cycling upon itself again and again.